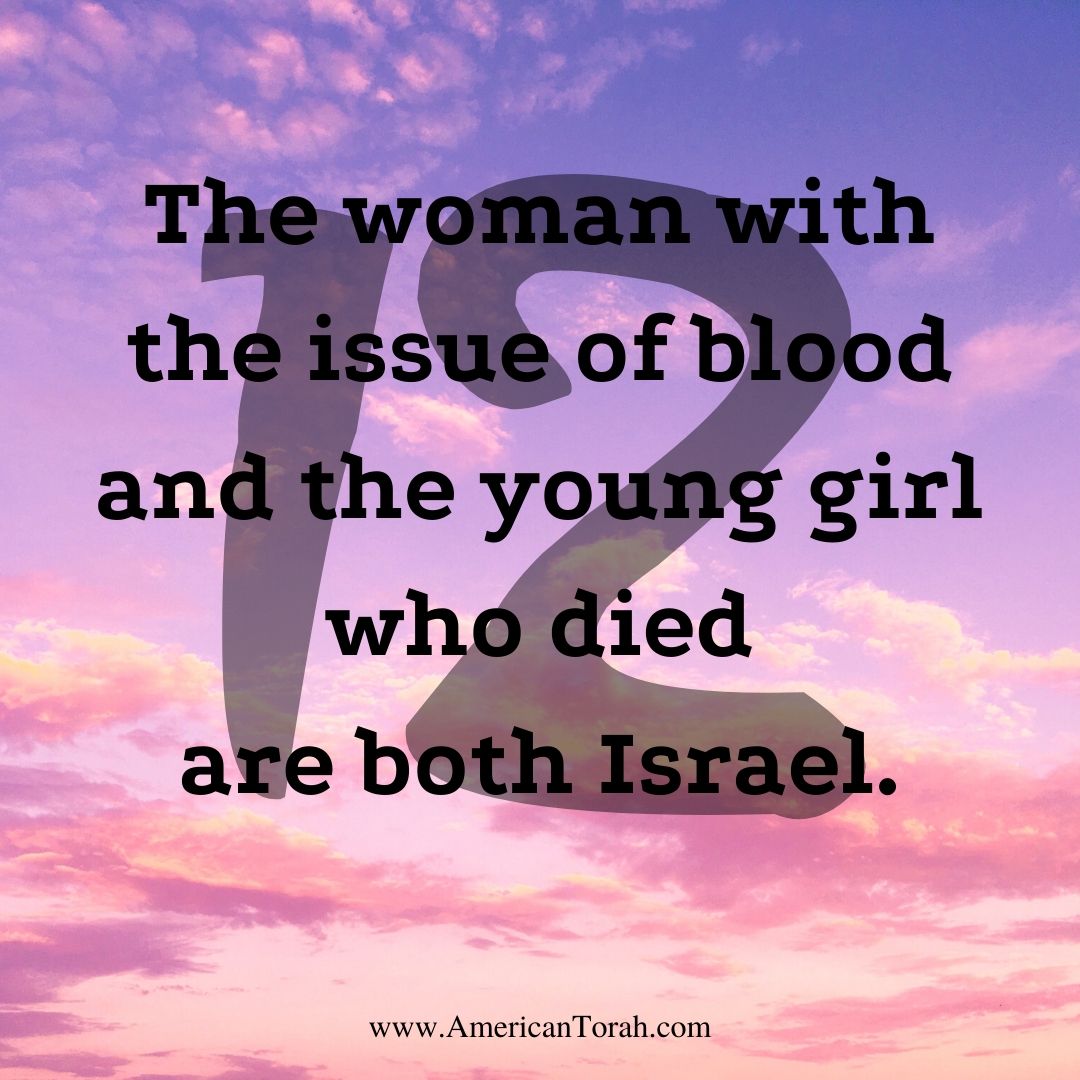 Matthew 9:18-26, Mark 5:22-43, and Luke 8:41-56 all tell the same story regarding an older woman and a young girl who were both healed by Yeshua. In each account, a pious Jewish man named Jarius asked him to heal his twelve-year-old daughter who was on the verge of death. As Yeshua followed the man to his house, a crowd gathered around him, and a woman who had had an issue of blood for twelve years touched his tzitzit (on the hem of his robe) and was instantly healed. Yeshua acknowledged the woman and then continued on to the man’s house where he brought the young girl back to life.

These seem like two separate events connected only by Yeshua and a shared moment in time, but the Gospel writers deliberately made the older woman’s story a part of the girl’s story by keeping it in the middle. The Gospels aren’t always told in chronological order, so there was no particular reason to maintain the order of events here unless there was a deeper significance. I believe that, while the story is completely true, it is a parable of Israel told through real life events.

In the parable, the woman and the girl both represent Israel, as illustrated by the twelve years, but in different aspects or segments.

The older woman was that part of the nation that was/is conscious of her status as the chosen people of God. Her illness is a reflection of the people’s sterile spiritual state. Long before Yeshua was born in Bethlehem, the Jews had abandoned following much of the Torah as it was given by God to Moses. They still studied and revered it, but they had also adopted “the tradition of the elders,” which, through its myriad rules, rendered the real Torah “of no effect” (Matthew 15:1-20). Still today, the Jews follow their rabbis and traditions in direct opposition to the Written Torah. They claim to follow God’s instructions, yet they don’t.

When the woman touched Yeshua’s garments, she wasn’t just touching the cloth. It wasn’t his clothes that she was after, it was the tzitzit fastened on the four corners. Tzitzit represent God’s Law, the Torah, and whenever we see them, we are to be reminded to whom we owe our allegiance and our obedience. The woman, healed through touching the symbol of the Torah on Yeshua’s garment, represents the Jews (and those from the nations who have joined themselves to them) who were/are being/will be restored to spiritual health by faith in God. Their faith will be evidenced by acknowledgement of Yeshua as their Messiah and returning to Torah as he taught it.

The young girl was that part of the nation which remained scattered among the nations. They lived in idolatrous unbelief and had forgotten their identity as children of Jacob. Her father was an Israelite, and she lived twelve years in his house, but her life and awareness was gone by the time Yeshua reached her. Her descendants in the world today are being restored to life through Yeshua along with multitudes of gentiles, but they are neglecting God’s instructions. Like the Jews, they elevate man-made traditions above the commandments of God. The only difference in this respect is the specific set of traditions that have supplanted Torah.

I want you to notice two other things about this story:

First, only those who were conscious of their illness were healed. Someone had to be willing to say, “Yeshua, heal me!” (or in the case of the young girl, “Heal my daughter!”) before they could be healed. People who don’t know that they are sick or who refuse to acknowledge their degraded spiritual state will never call out for salvation. Yeshua once sarcastically told the Pharisees that “Those who are well have no need of a physician.” A very large segment of the physical descendants of Jacob have been cut off and will never return because they refuse to acknowledge their illness and need of a Savior.

Second, after Yeshua raised the young girl, he didn’t tell her to go her way as he did with the older woman. He instructed the people of the house to feed her. In Scripture, food often represents spiritual instruction (See John 21:16-17, 1 Corinthians 3:2, and Hebrews 5:12-14). When the spiritually dead have been brought to life in Yeshua, it is vital that they be taught from the Scriptures or else they will die again. They must be made into disciples, taught to live as Yeshua lived.

Whether native born Israelites or grafted in from the nations, we have all inherited lies from our ancestors, traditions that confuse or entirely eclipse God’s commandments. “By your traditions, you have made the commandment of God of no effect.” We are saved from damnation by the grace of God and not our obedience to Torah. However, once saved, we require nourishment in the form of sound teaching and obedience to sustain our lives.

There will come a day when the New Covenant is in full effect and no person needs to instruct another in the ways of God, but that day isn’t here yet. We are obligated to love one another by keeping the commandments ourselves and by teaching others to do likewise.

I call heaven and earth to witness against you today, that I have set before you life and death, blessing and curse. Therefore choose life, that you and your offspring may live, loving YHVH your God, obeying his voice and holding fast to him, for he is your life and length of days, that you may dwell in the land that YHVH swore to your fathers, to Abraham, to Isaac, and to Jacob, to give them.
Deuteronomy 30:19-20

For more on the divided house of Israel watch my Who Is Israel series: