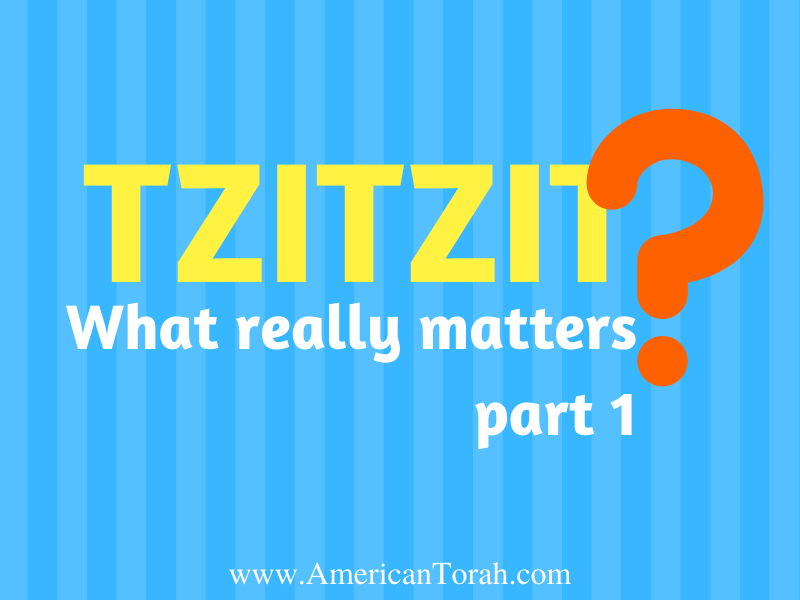 Tzitzit are one of those distinctively “Jewish” things, like tallits and kippahs, that most Christians are aware of at some level, but don’t really understand. Tzitzit is the Hebrew name for the tassel or fringe that many Jews, Messianic Jews, and Hebrew Roots people wear on their clothing. The plural form is tzitziyot—tzitzit is singular—but most people today use the singular form for plural also, like a collective noun.

Tzitzit are also called tassels and fringes. Either of those words might be used in various places, depending on which English translation you are reading.

If you don’t know very many Jews or Torah observant Christians yourself, you’ve probably still seen some people—usually men—with white strings hanging from under their shirt or jacket on television or at the airport without giving it much thought. It’s just part of a religious or ethnic costume, so it tends to get lost in the overall picture of “those people”.

Tzitzit appear either explicitly or by implication in many passages in the Torah, the Psalms, the Prophets, and in the Gospels. Despite this fact, churches rarely teach anything about them. As far as most Christian pastors and theologians are concerned, tzitzit are just one of those things that Jews wore to make sure they looked different than other nations, and since “there is neither Jew nor Greek” in Christ, we don’t need that kind of thing anymore.

Or so we are taught.

That’s really a shame, because tzitzit are connected to some really important spiritual principles. It’s also completely wrong. God didn’t give reasons for all of his instructions, but he did for this one, and it had nothing to do with looking different.

Tzitzit in the Torah

The primary passages that define tzitzit are Numbers 15:37-41 and Deuteronomy 22:12.

The LORD said to Moses, “Speak to the people of Israel, and tell them to make tassels on the corners of their garments throughout their generations, and to put a cord of blue on the tassel of each corner. And it shall be a tassel for you to look at and remember all the commandments of the LORD, to do them, not to follow after your own heart and your own eyes, which you are inclined to whore after. So you shall remember and do all my commandments, and be holy to your God. I am the LORD your God, who brought you out of the land of Egypt to be your God: I am the LORD your God.”
Numbers 15:37-41 ESV

You shall make yourself tassels on the four corners of the garment with which you cover yourself.
Deuteronomy 22:12 ESV

These commands were given to Israel in the Wilderness. The Numbers 15 command was given at the beginning of the forty years, right after the 10 spies brought a bad report of the land, and the Deuteronomy 22 command was part of a recap of the whole Law delivered by Moses just before the people began their conquest of the land.

What Do the Tzitzit Commands Actually Say?

Let’s examine the Hebrew words in these passages so we know what they are really saying.

Make, in both cases, is from the Hebrew word asah, which can be reasonably interpreted to mean make (as in manufacture) or attach. Some people believe this means you should make your own tzitzit, while others believe it’s fine to buy pre-made tassels as long as you attach them to your garment yourself.

Garment is from the Hebrew word beged. It is used throughout the Hebrew scriptures to refer to all kinds of clothing.

Put is from the Hebrew natan. It means to give, put, set, assign, etc.

Cord is from the Hebrew patiyl, and means strand, lace, or ribbon. It is related to the word patal, which means to be twisted, implying that a strand in this sense consists of multiple threads twisted together.

Blue is from the Hebrew tekhelet. The word might have been derived from the name of a mollusk or snail which was used to make a blue dye. Many people believe that it only refers to that blue dye and no others, but there are good reasons to believe it can refer to the color blue, no matter where the dye came from.

Corner is from the Hebrew kanaph. It refers to a wing, extension, extremity, or border. Corner is a reasonable translation in context, but wing or extremity is probably more literally accurate. Since the standard outer garment of the time was probably a large rectangle with an opening for the head, “four extremities” and “four corners” would be synonymous.

Make/attach tassels on the four extremities of your garments. Include a strand of blue with the tassel of the extremities. When you look at the tassels, they will remind you of all the commandments of YHWH, so that you will obey Him instead of following your own desires.

Although the commandment seems straightforward, there has always been disagreement on exactly how to apply it.

Judaism has a very long history of cumulative interpretation and application of these commands, and has developed detailed regulations on how tzitzit are to be made and worn. Most of these rules are derived from implications of the Biblical text or from practical considerations at one or another time in history. Few of them are based on explicit instructions in the written Torah.

The Materials of Tzitzit

Tzitzit should be made of white wool, and may or may not have a blue thread, depending on whether or not you believe that the specific mollusk from which the dye was originally extracted in Biblical times has been rediscovered or not. The threads that make up the tzitzit must be manufactured specifically for the purpose and may not be used for anything else.

Karaite Jews believe the tzitzit should be made of the same material as the garment to which they are being attached and that any blue dye can be used for the servant thread.

The Form of Tzitzit

There are a few different traditional methods of winding or twisting a tzitzit. The only firm requirements are that there are four white threads doubled over to make eight, and one longer thread (the blue one, if you include it), called a servant thread, is wrapped around the others. These are the two most common patterns:

Both methods use five double knots, one between each set of windings and one on each end to secure the whole, with the loose strings at the end twice the length of the knotted section. There are other methods, but the vast majority use one of these two.

The Placement of Tzitzit

Tzitzit must be attached to the corners of a four-cornered garment worn on the upper body. The garment can be made of any material, but wool and silk are preferred. In order to qualify as four-cornered, the garment must have a significant split along the side seam, usually interpreted as at least half the length of the garment or 18-24 inches. A full tallit gadol satisfies this requirement by being completely open on the sides and long enough to be draped over the shoulders so that the corners hang down in front and back.

The tzitzit must be permanently affixed to the corners, by a hole placed one to two inches from the edge. Tallits have a square of cloth on each corner as reinforcement for this purpose. Jews only wear the tallit gadol during prayer times or on special occasions, such as Yom Kippur and weddings.

A tallit katan is made more like a t-shirt but with the seams joined for only a short length under the arms in order to be sure there are four legitimate corners. Unlike the tallit gadol, it is intended to be worn as an undergarment during all waking hours. The tzitzit can be worn hanging out from beneath a shirt so they are visible or else completely hidden.

In Orthodox Judaism, only men are required to wear tzitzit, but women increasingly wear them also, especially in Reform Judaism. Opinions on whether or not women should wear or are allowed to wear tzitzit change with time and culture. They rarely appear in ancient and medieval art as obvious tassels, but when they do, men and women are both depicted wearing them. Claims that women never wore tzitzit until the modern era are obviously false.

Most rabbis believe that women are not required to wear them, but may if they desire to do so. Strict Orthodox Jewish rabbis are likely to be more opposed.

Summary and Introduction to Part Two

In this installment, I examined the text of the two commandments to wear tzitzit and surveyed Jewish traditions about making and wearing them.

I know that this will seem dry and pointless to most Christians who do not themselves believe they should be keeping Torah, but we know from Paul’s instructions to Timothy that all Scripture is profitable for doctrine and reproof.

All Scripture is breathed out by God and profitable for teaching, for reproof, for correction, and for training in righteousness, that the man of God may be complete, equipped for every good work.
2 Timothy 3:16-17

Joshua concurred and read the entire Torah to the native born Israelites and sojourners alike after they had conquered Jericho and Ai.

And afterward he read all the words of the law, the blessing and the curse, according to all that is written in the Book of the Law. There was not a word of all that Moses commanded that Joshua did not read before all the assembly of Israel, and the women, and the little ones, and the sojourners who lived among them.
Joshua 8:34-35

If you desire to know the mind of God and the manner in which he wants his people to live, then even these seemingly minor matters should not be neglected.

In the next installment, I’ll describe the Wild West of Messianic and Hebrew Roots tzitzit and return to the Torah to add some historical and scriptural context. That is where you will see the real purpose and value of tzitzit.

2 Replies to “Tzitzit, Part 1: the Torah and the Rabbis”