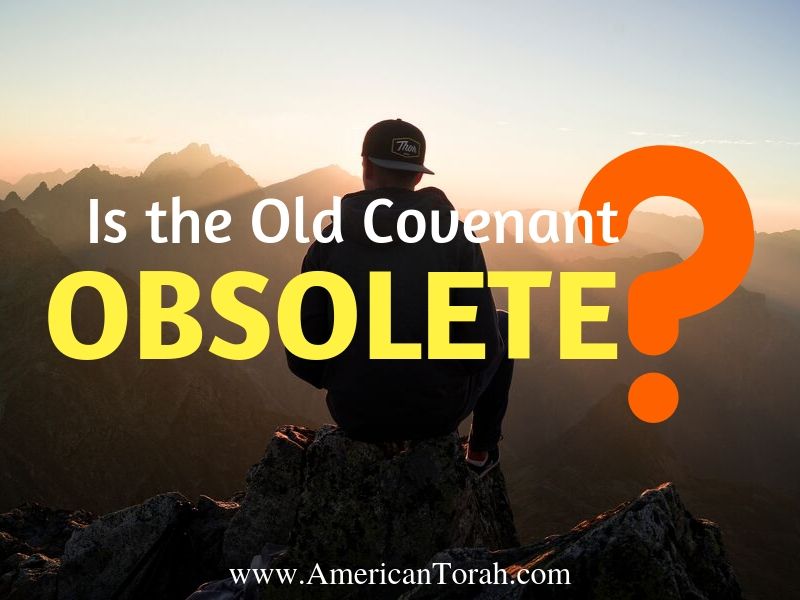 In speaking of a new covenant, he makes the first [old covenant] obsolete. And what is becoming obsolete and growing old is ready to vanish away.

In the course of a respectful (not sarcasm!) conversation on Facebook, a friend made this statement:

I thought readers of American Torah might also appreciate my reply:

It depends on what you mean by “obsolete”. Whatever the author of Hebrews meant, it seems that he didn’t mean it was completely gone (annulled) at the time he wrote, decades after Jesus’ resurrection, because he wrote that the “old is ready to vanish away”, not that it had already vanished away.

In my opinion, Hebrews is the second most misunderstood book in the Bible (Revelation being the first). I’ll use a couple of metaphors to explain two core concepts that the writer discusses.

One, the writer compares Jesus’ priesthood with Aaron’s. Two, he compares the New Covenant with the Old (Sinai) Covenant. (I say one and two, not first and second, because he jumps back and forth and all around in making his points, which convinces me that Paul was the author, possibly through an intermediary.)

Metaphor One: Think of the two priesthoods as a hammer and screwdriver. A hammer is great for driving nails, but terrible for driving screws. In fact, if you try to use a hammer to drive a screw, you’re likely to make a mess of the wood and break the screw, possibly a finger as well. Hammers were intended to drive nails, and that’s fine as long as you’re only nailing things together. But if you have a new task that requires driving screws, you’re going to need a new tool to drive them.

If the task at hand involves certifying a leper as clean or making a burnt offering in worship, you go to Aaron. That’s what he’s good for. The Aaronic priesthood is fine for what it does, but it was never capable of mediating eternal salvation. Aaron was completely incapable of permanently removing the stain of sin and restoring us to a right relationship with God for all eternity. If that’s your goal, then you need a new tool, a new priesthood: Jesus.

Hebrews doesn’t say that the Melchizedek Priesthood replaces the Aaronic. It says that, if you are dealing with a different covenant, altar, and domain, then you need a different priesthood too. One doesn’t replace the other, but operates in parallel on a different, higher level.

Metaphor Two: Picture the Sinai Covenant as a full moon and the New Covenant as the rising sun. As the sun rises, the moon doesn’t cease to exist. It continues to “rule the night” and to influence the tides, but it does fade in comparison to the much brighter light of the sun. The moon gives light both at night and in daytime, but when the sun rises, the moon’s light becomes superfluous–osbsolete, one might say–as if it has faded with age.

Just like the moon, the Old Covenant has no light of its own. It is a reflection of a much greater covenant, that the Scriptures anachronistically call the New Covenant. It’s “new” because, although it was promised and existed in principle from the very beginning, the sacrificial blood that sealed it was shed relatively recently, and it is still not fully risen. Until the promise of Jeremiah 31 (quoted in Hebrews 8) is fulfilled, we can’t really say that the New Covenant has reached its zenith:

When Will the New Covenant Be Fully in Effect?

According to Jeremiah and Hebrews, one of the distinctive qualities of the New Covenant is that God’s Law will be written on the hearts of the people. They will no longer need a written Law because they will know God’s character instinctively, and will know right from wrong without having to be told. This presupposes that the Law as written in the Old Covenant is an accurate reflection of God’s character and what he considers to be moral behavior.

As we internalize his Law, we obey what the Law says without having to continually reference the written word. This absolutely does not mean that we are free to throw out all of the moral standards detailed at Sinai because we have the Law written on our hearts. If we believe that, then it is clearly NOT written on our hearts and we still need to be told what to do.

“The Law was written for sinners, not for the righteous.” But “If any man says he doesn’t sin, he’s a liar and the truth isn’t in him.”

I believe that when–or sometime after–Jesus returns, he will complete the process of establishing the New Covenant. We will finally have God’s Law fully written in our hearts and nobody will need to tell anyone “Know God” because we will all know him at every level. When that happens, we can say that the Old Covenant has finally become completely obsolete because its light and purpose has been fully subsumed into the light of the Sun of the New Covenant.

A related post on Galatians: Galatians and Torah, the short version.
And for more on the false dichotomy of “Grace vs Law”: Grace vs Law.