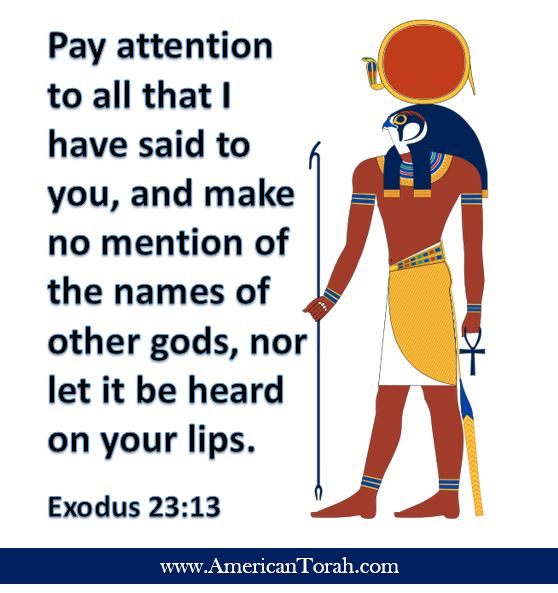 A couple of days ago, I saw someone on Facebook expressing dismay about the word “amen”. Someone had told them or they had read somewhere that “amen” comes from the name of the Egyptian god Amun Ra, and he was feeling very convicted about using it to end every prayer. He wanted to pray in Jesus’ name, not Ra’s!

I do understand, and I have struggled with similar questions. Exodus 23:13 says that we shouldn’t allow the names of pagan gods to touch our lips.

I don’t like using the names of the days of the week because they are named for pagan gods, and, many years ago, I once tried to replace them with “first day”, “second day”, etc. I soon realized that this presented another problem: Nobody understood me, and I spent all my time explaining what I meant by “second day”, instead of just saying “Monday”. If I’m unable to communicate with people, then I won’t be able to function as an effective community member, and God’s Law can’t be kept alone. We need community in order to be faithful to God.

(To be fair, you could lose the word “amen” from your vocabulary without hurting your communication with other people at all, so if it bothers you very much, then, by all means, don’t use it. God certainly won’t be offended by you not saying it.)

Through time and further study, I also came to understand that the concept of “name” in Scripture is much more complex than a mere label we attach to someone. Calling on the name of YHVH or praying in the name of Yeshua (Jesus) doesn’t mean only making the sounds of the spoken names. It means calling on the authority, promises, and reputation–the whole person–represented by the labels.

God doesn’t need labels to refer to himself. He doesn’t need a name to differentiate himself from other gods, like we do to tell John from David. Hence, when Moses asked whom he should say sent him, God told him, “I am the one who is. I am self-existent without reference to anyone or anything else.”

Those spoken and written labels, YHVH and Yeshua, ought to have meaning to us, and the power is in the meaning, not the letters and sounds. The tetragrammaton isn’t a magical incantation that has power or authority over God. When we call on his name, we aren’t just saying Yahweh or Jehovah or Yahuah (or whatever you use), we are calling on the totality of who he is.

I don’t believe that God has a native language that would make any sense to us. Human languages are for humans, not him. We don’t have to speak any particular language in order to communicate with him. He understands them all, because he understands us. He understands us just as well in Mandarin Chinese as he does in Spanish or English, and he knows that someone speaking Mandarin isn’t speaking Spanish..

As we speak, we create audible sounds, and every sound we can make means something in some other language, probably in several. The sound “wee” is a first-person plural pronoun in English, but it means “yes” in French, and it’s also the name of a video game console. I’m sure it has at least a dozen meanings in as many other languages. There is probably a false god out there that goes by the name “We”.

Fortunately, we don’t need to care about that, because when we say that word, we aren’t speaking to or about a false god. Since we’re speaking English, we’re using it as a collective pronoun. If I learned that there really was a god named We (or Wii or Oui or Wee), it would be foolish to eliminate the pronoun, we, from our vocabulary, because nobody would understand us in English anymore.

That’s not a problem, though. Just because there are any number of other languages that have identical sounding words, doesn’t mean we’re speaking the words of any of those languages when we make the same sound. God knows that, when we say “we”, we’re not speaking about or to that false god. He knows we’re speaking English and that we’re not calling on the names of other gods or referring to them in any way.

The same is true of “amen”. There is no actual linguistic connection between the name of an Egyptian god and the Hebrew word “amen”. None, whatsoever. Anyone who says otherwise is trying to pass off an old urban myth as established fact, but age and repetition doesn’t make a lie any more true.

How can I be so certain? God commands people to say “amen” in Numbers 5:22 and Deuteronomy 27:14-26. If anyone would know if the word was connected to an Egyptian deity, God would.

We aren’t speaking ancient Egyptian when we pray and we aren’t referring to a false god in any conceivable way when we say “amen”. God’s native language isn’t Egyptian, and he won’t be offended if some English or Hebrew words sound like some Egyptian words.

Think about this. Here are just a few words you would have to eliminate from your vocabulary if you want to avoid saying anything that sounds like the name of a false god:

And, of course, the names of the days and some of the months. I’m sure there are many hundreds more.

I hope you can see just how crazy things could get if we seriously tried never to even inadvertently speak the name of a false god.

I really wish we could change the names of our days, which, unlike “amen”, really are connected to the names of pagan gods. I seriously hope Yeshua fixes that when he comes back. In the meantime, I content myself in knowing that I am not referring to Thor, Freya, or Saturn in any meaningful way when I talk about my plans for the week. All days belong to YHVH, and Thursday is just a word.

Don’t worry about whether an English or Hebrew word sounds like the name of some obscure pagan god. That’s a distraction that our real enemy throws in your face to keep you from focusing on what’s really important: worshiping the Creator and doing tangibly good things for your neighbors.

5 Replies to “Is saying “Amen” speaking the name of a false god?”