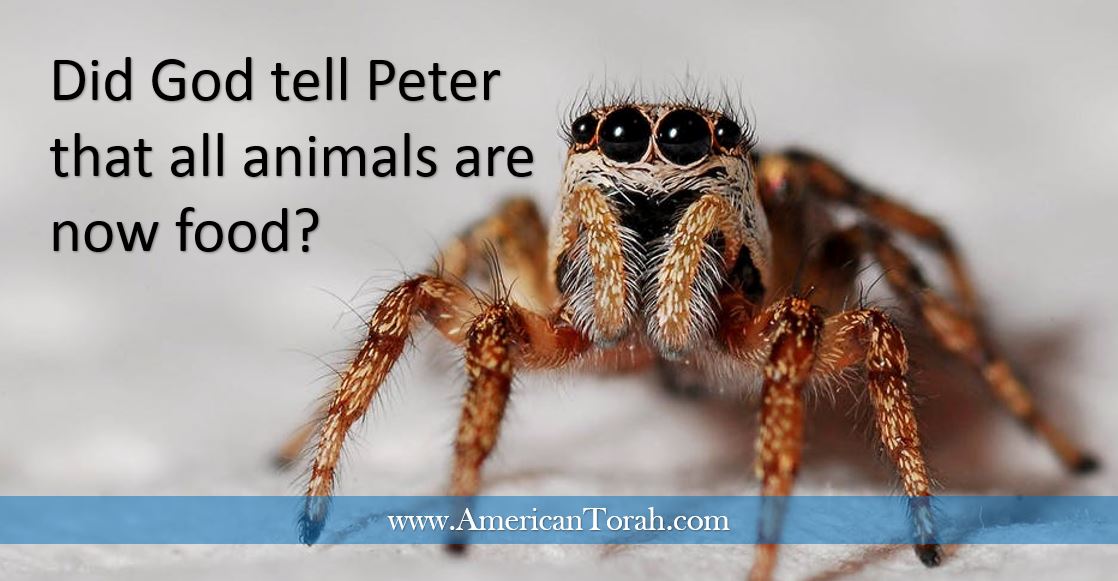 Peter’s vision in Acts 10 proves beyond any doubt that the Jewish dietary laws were canceled by God and have no relevance whatsoever to Christians.

This is a common objection to Christians continuing to keep God’s Law as given to Moses. It is a serious objection too. If God really commanded Peter to kill and eat a sheet full of unclean animals, that would be a very strong indication that the dietary laws are no longer in effect, so it warrants a thorough examination. It’s a long passage to cut and paste into a blog, so I’ll break it up into chunks and see if I can’t pare it down a little.

Acts 10 begins by telling us about Cornelius, a man very much like Abraham. They were both gentiles who loved God and lived by faith. God respected that faith and sent Cornelius an angel who told him to send for Peter. Note that the Angel did not tell Cornelius to go to Peter but to have Peter brought back to him. This was because Peter had a very important lesson to learn about gentiles and faith. (We are never too big, too smart, too Spirit-filled to learn from someone else, even someone of apparently much lesser rank.)

(9) The next day, as they were on their journey and approaching the city, Peter went up on the housetop about the sixth hour to pray. (10) And he became hungry and wanted something to eat, but while they were preparing it, he fell into a trance (11) and saw the heavens opened and something like a great sheet descending, being let down by its four corners upon the earth. (12) In it were all kinds of animals and reptiles and birds of the air. (13) And there came a voice to him: “Rise, Peter; kill and eat.” (14) But Peter said, “By no means, Lord; for I have never eaten anything that is common or unclean.”
Acts 10:9-14

There are two very startling things going on here.

The first thing was startling to Peter who, as an observant Jew, had never eaten anything “common or unclean.” To him this was nearly as bad as idolatry or murder. He was startled and dismayed that would God command him to transgress the Law, to commit sin.

The second thing, the fact that Peter was shocked–ought to be quite startling to any Christian who believes that Jesus died so that we don’t have to keep the Law anymore, particularly the parts of the Law concerning what we are and are not to eat.

How could Peter not know that Jesus made it OK for him to eat unclean animals? He had walked at the Savior’s side as his friend, daily hearing him teach and preach on how to live a holy life and on the deeper meaning of God’s commandments. Peter had personal, intimate conversations with him about God, faith, salvation, and the Law. He was there on the day that the Pharisees confronted Yeshua about the disciples eating with unwashed hands and heard with his own ears the Messiah proclaim all foods clean. He must have known for many years by this time that no meat could be unclean anymore! At the very least he must have known that this day was coming. Yet he had never in his life eaten anything unclean, and he was shocked at the suggestion.

Is it possible that the subject never came up during Peter’s three year theological tutelage at the feet of Israel’s Messiah? Even after that famous confrontation with the Pharisees in which Yeshua supposedly declared all “foods” clean?

I don’t think so. Yeshua and his disciples ate together almost every day, multiple times each day, and sometimes even with gentiles, while he expounded at length on the meaning of the Law. Most likely, the subject came up more than once, yet it never crossed Peter’s mind that he might be free to eat any animal he wanted.

The truth is that Yeshua never even hinted to Peter that he had come to die so that everyone could eat bacon with their eggs. If God really wanted Peter to eat unclean animals, then this was a new change, and not something that Peter had heard or suspected before.

(15) And the voice came to him again a second time, “What God has made clean, do not call common.” (16) This happened three times, and the thing was taken up at once to heaven. (17) Now while Peter was inwardly perplexed as to what the vision that he had seen might mean, behold, the men who were sent by Cornelius, having made inquiry for Simon’s house, stood at the gate (18) and called out to ask whether Simon who was called Peter was lodging there.
Acts 10:15-18

Three times, God told Peter to kill and eat, but each time he took the sheet with the animals away before Peter could carry out the command. If God sends a vision or a dream, then we know it must have an interpretation, but Peter didn’t immediately know what it might be. In fact, he spent much of the rest of that day puzzling over it and didn’t fully realize God’s message until the three men arrived from Cornelius.

Here is what puzzles me most about this perennial controversy: We don’t have to wonder what Peter’s vision meant. When he arrived at Cornelius’ house in Caesarea, he told everyone there in plain language exactly what the vision meant, and Luke recorded his statement for us:

And he said to them, “You yourselves know how unlawful it is for a Jew to associate with or to visit anyone of another nation, but God has shown me that I should not call any person common or unclean.”
Acts 10:28

The sheets, the animals, the voice… It was all about people, not food! God wasn’t telling Peter that he had changed the rules about what animals were acceptable for food. God sent the vision to tell Peter that he was bringing people from all nations into the Kingdom, that the Jewish traditions keeping Jews and Gentiles apart were not right. The salvation bought by Yeshua’s blood was for all people, not just the Jews, and Peter had no right to exclude anyone from full fellowship in the Commonwealth of Israel based solely on the circumstances of their birth.

Some will object, saying, “Surely God would never command someone to commit a sin even in a vision, so Peter’s vision in Acts 10 presupposes that unclean animals have also been made clean.”

Why wouldn’t he? This is another parallel with the story of Abraham.

In Genesis 22, God commanded Abraham to make a human sacrifice of his own son, something that was clearly against God’s Law. Even before Sinai, only certain animals were acceptable for offerings and God has always abhorred human sacrifice. When God told Abraham to kill his son, he never intended anyone to believe that he had therefore abrogated laws against murder and human sacrifice. It was a sin to offer up a human before Mount Moriah, and it remained a sin afterwards. Although God told Abraham to kill Isaac, he prevented him from shedding even a drop of blood.

Now, to make this even clearer for the hard of hearing and the poor of vision:

God commanded both of these men to do something that was against his Law, and in both cases God prevented them from carrying out the command. In neither case did God change his Law. In both cases, God taught us something about his plan of salvation for mankind.

Abraham learned that God would send a substitute sacrifice to do what we could not, the Lamb of God who would take away the sins of the world.

Peter learned that God can make children for Abraham from anyone in any nation, that there are no unclean people among those whom God has redeemed.

After telling Cornelius what he had learned from his vision, Peter went on to teach that whole household about Yeshua, the Messiah of Israel, about his miracles, his death, and resurrection. All of those present, both Jew and Gentile, were filled with the Holy Spirit, and began speaking in tongues and praising God.

All that… and not a single word about lobster ravioli, BLTs, or the flesh of any other unclean animals.

We know that Yeshua said that not even the least significant commandment would be removed from the Law until heaven and earth pass away and “all is accomplished.” Heaven and earth are still here. All has not been accomplished. Unless Yeshua lied, then the dietary laws cannot have been removed from God’s requirements of his people, and nothing in Acts 10 implies otherwise.

God’s Law stands unchanged, just as Yeshua said it would in Matthew 5.

One Reply to “White Sheets, Creepy Crawlies, and Unclean People”