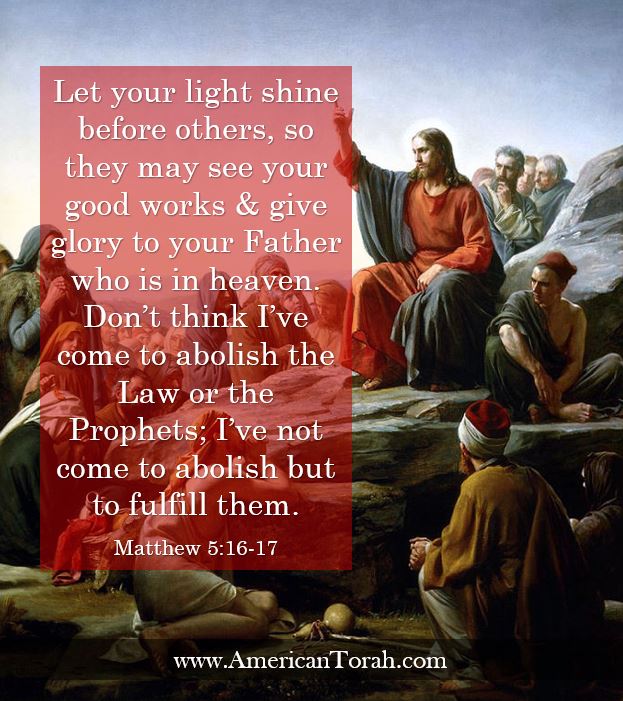 Some people insist that Yeshua’s (Jesus) words in this verse don’t necessarily mean that we should be keeping and teaching Torah (aka God’s Law) either because 1) Yeshua said people who throw out Torah “will be called least in the kingdom” and therefore must still be in the kingdom or 2) these words were spoken to Jews alone and were not intended for Gentile Christians at all.

On point one, I agree completely. Those who have put their faith in Yeshua for their eternal salvation are part of the kingdom of heaven even if they reject God’s Law and teach others to do the same, provided they do so from an honest misunderstanding of scripture and not from rebellion against God.

However, on the second point, we have a more serious difficulty. I’ll set aside whether or not the statement is factual or not for the moment and move on to the implications. This one verse (19) is part of a longer bit of oratory known as “The Sermon on the Mount”, all of which was addressed to a single gathering of people. No portion of the sermon was separated out as being addressed to one subset of the gathering more than another subset. With that in mind, let’s take a look at some other lines from the sermon:

There’s much more, but I’m sure you recognize most or all of the passages listed above. I hope the problem is already apparent to you: If verse 19 is intended only for Jews, then verses 3 and 44, etc., are also intended only for Jews, and Gentile Christians are free to hate their enemies and retaliate against those who persecute them.

Almost everything Yeshua is recorded to have said in all four Gospels was addressed to Jews. The idea that anything he only said to Jews was only intended for Jews requires that non-Jews ignore almost the entire text of the Gospels. How absurd!

The Apostles wrote that we ought to live according to Yeshua’s instructions. He himself said, “If you love me, keep my commandments.”

And here is one thing that Yeshua instructed:

(14) You are the light of the world. A city set on a hill cannot be hidden.  (15)  Nor do people light a lamp and put it under a basket, but on a stand, and it gives light to all in the house.  (16)  In the same way, let your light shine before others, so that they may see your good works and give glory to your Father who is in heaven.  (17)  Do not think that I have come to abolish the Law or the Prophets; I have not come to abolish them but to fulfill them.  (18)  For truly, I say to you, until heaven and earth pass away, not an iota, not a dot, will pass from the Law until all is accomplished.  (19)  Therefore whoever relaxes one of the least of these commandments and teaches others to do the same will be called least in the kingdom of heaven, but whoever does them and teaches them will be called great in the kingdom of heaven.  (20)  For I tell you, unless your righteousness exceeds that of the scribes and Pharisees, you will never enter the kingdom of heaven.
Matthew 5:14-20

Many translations put a break and a topic heading in between verses 16 and 17, but these two statements are placed together for a reason. Verse 16 speaks of “good deeds”, and verse 17 defines those deeds: Following God’s commandments as detailed in the Law and the Prophets.

This was addressed to a group of people who were probably mostly Jews with a few Gentiles, but they were intended for everyone who might wish to be a citizen of the Kingdom of Heaven.

“Whoever does them and teaches them will be called great in the Kingdom of Heaven.”

So go do them, and, when you have accumulated some practice and understanding, teach them. I think I have some articles around here somewhere on how to do that.