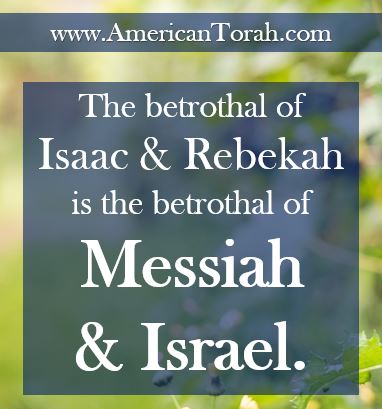 In the Scriptures, unnamed servants are often symbolic of God’s Spirit. Although we know Abraham’s senior servant was Eliezer, he is not named in the story of the betrothal of Rebekah and Isaac, in which he takes a central role.

Abraham, whose name means “Father,” charged his Servant with the task of finding a wife for his son, Isaac. When he arrived at the well of Haran, he prayed that God would reveal the right woman by way of a test of selflessness. When Rebekah passed the test, she was given gifts and asked to accompany the servant back to Canaan to be with her new husband.

This story is an image of the Messiah and his Bride. Abraham represents God, the Father. He sends the Spirit into the world to find those who are qualified to be his people. When the Spirit has identified God’s people from among all the others at the well, he gives them an extravagant gift and asks if they will accompany him to the Messiah. The bride price was paid before the bride had even been asked. It was a down-payment, an “earnest,” of the covenant that was promised. (2 Cor 1:22, 2 Cor 5:5, Eph 1:13-14) The bride of the Messiah leaves the world of her own free will and follows the Spirit to the Messiah in the Promised Land, sight unseen. She joins the Messiah in faith that he is who he claims to be and has the power to deliver on his promises.