Abram took Sarai his wife, and Lot his brother’s son, and all their possessions that they had gathered, and the people that they had acquired in Haran, and they set out to go to the land of Canaan. (Genesis 12:5)

Abram (this was before God renamed him “Abraham”) was a very wealthy man when God first called him to leave his home in Haran. He had a wife, livestock, lots of stuff and even slaves, and as time went on he only got richer.

It doesn’t appear that Abram set out to grow his wealth. He was generous with what he had, didn’t demand anything from anybody, and refused to accept gifts from unsavory characters. Yet at the end of his life, he had a large family and immense wealth.

Lot was a wealthy man too. We don’t know that he had anything at all when he left Haran with Abram, but we know that they both had large herds and servants sometime after leaving Egypt. So much so that Abram decided they needed to put some space between their households in order to reduce friction and competition for resources.

After they separated, Lot moved his tents close to the city of Sodom, eventually buying property within the city walls and even becoming a respected city leader. His herds and holdings in the countryside probably continued to grow during that time.

Unfortunately, Lot didn’t end life nearly so well as Abram did. Most of his family had died and what was left was extremely disfuctional. His herds and servants were all dead or scattered. His home and social life were destroyed in Sodom.

These two men came from the same family, had the same traditions, and spent many years traveling, living, and working together. They were both righteous men, so how did they end so differently?

I think there were two major differences between Lot and Abram:

Abram was active, while Lot was passive. An interesting factoid that might be intended to allude to this quality of their respective characters is in the way their children are described. Only male children of Abraham are listed in Scripture, although he almost certainly had daughters as well, while Lot is only said to have daughters.

When their two herds became too great to live comfortably together, Abram saw the problem and offered a solution. He built a godly community from scratch, while Lot joined a community that was already well established. When Abram saw the angelic visitors he ran to meet them, but when Lot saw them, he merely stood to greet them. Finally, when Abram learned of God’s plan to destroy the city, he tried to save the people, but when the men of Sodom surrounded Lot’s house, he only tried to get them to commit a lesser sin.

There were times when Abram allowed himself to be swayed by men (in Egypt and in the matter of Hagar, for example), but usually Abram followed God alone, while Lot usually followed other men. As long as he stayed with Abram, he did well, but his real problems began when the he exchanged Abram’s company for Sodom’s.

Whoever walks with the wise becomes wise, but the companion of fools will suffer harm. (Proverbs 13:20)

Abram didn’t set out to grow his wealth, but it grew regardless because he trusted in God who blessed him for it. On the other hand, despite Lot’s long relationship with Abram, he hadn’t learned that real wealth comes from a relationship with the Creator, not from how much of the creation he could control. By all the wisdom of men, better pastures and better markets ought to equal greater wealth, but there are different kinds of wealth of more or less permanence.

When Abram gave Lot first pick of grazing land, he chose a land rich in the physical but extremely poor in the spiritual. Abram moved his herds to the relatively barren hills, away from the corrupt cities of Sodom and Gomorrah, but closer to God. He grew steadily in both material and spiritual possessions, content to accept what God would give him in exchange for faithfulness and good stewardship. Abram’s material wealth evaporated upon his physical death, divided among his sons, but his spiritual wealth has continued to grow exponentially over the millennia.

Lot’s wealth, on the other hand, didn’t even last his own lifetime. One morning when he woke up hungover in a cave overlooking a once-lush valley, now smoking and ruined, he surely understood the meaning of Paul’s words to Timothy:

But godliness with contentment is great gain, for we brought nothing into the world, and we cannot take anything out of the world. But if we have food and clothing, with these we will be content. But those who desire to be rich fall into temptation, into a snare, into many senseless and harmful desires that plunge people into ruin and destruction. (1 Timothy 6:6-9)

Surround yourself with people of faith and godliness. Their influence will elevate you. However, don’t be content with their mere company. Consciously work to emulate them so that when they are gone, you can stand alone with God and help to elevate someone else. 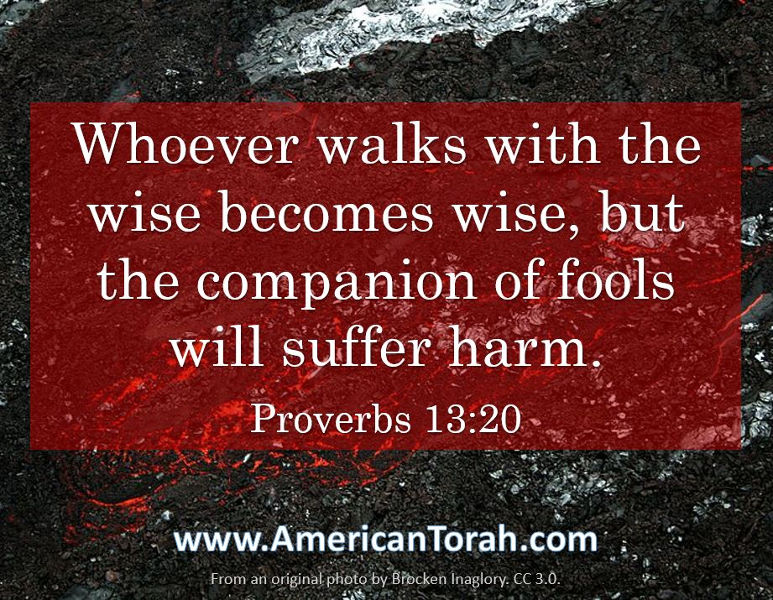