Sukkot is that one week of the year when every Jewish neighborhood turns into a shanty town. The word “sukkot” is usually translated “booths” or “tabernacles”, but more literally means lean-tos, as in a temporary shelter assembled quickly from whatever materials happen to be close at hand.

Traditionally, a sukkah (the singular form of sukkot) is a three-sided shelter made of tree branches with an open-lattice roof, but these days, you can see them built out of everything from PVC pipes and plastic to 2x4s and plywood. Some of us less conventional types put up a tent or borrow a portable bicycle sukkah for a few minutes.

Yes, that’s exactly what it sounds like: a small sukkah mounted on the back of a bicycle for feast keepers on the go.

One of the really interesting things about God’s feast days is that they primarily memorialize a series of divine actions that occurred within just a few months of each other. For example, Passover is about the final plague that God sent against Egypt and how He freed the Hebrews from slavery. Shavuot is the anniversary of God giving of the Law on Mount Sinai. Yom Teruah memorializes God’s voice as it was heard from Sinai, among other things.*

But is it really? 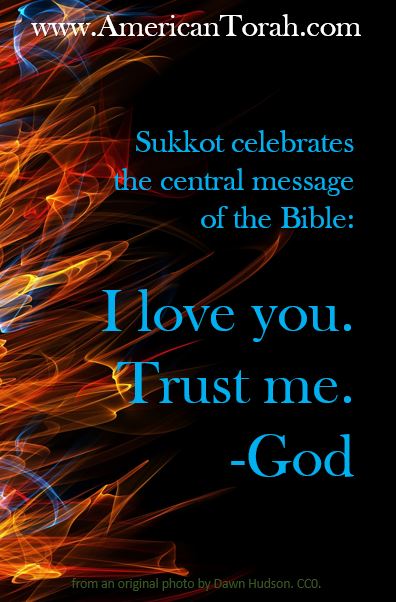 Starting from the very first night of the Exodus when the Hebrews built sukkot at a placed named Sukkot (Exodus 12:37), they slept undisturbed in a wilderness that was barren, but not uninhabited. They didn’t have guards except to keep unauthorized people from hurting themselves in the Tabernacle. They didn’t assign watches at night. They walked through the lands of Midianites, Amalekites, and other semi-nomadic peoples who proved that they were more than willing to do the Hebrews harm despite the dramatic defeat of Egypt, yet they slept safely in the flimsiest of structures with nobody to watch over them except for that towering pillar of fire and smoke.

In the wilderness, Israel was completely under the protection of God Almighty and nobody but Israel could compromise that security.  The didn’t have to build fortifications or post guards because God kept watch of the camp of Israel. This is what Sukkot is really all about: the divine providence of God.

God said to live in sukkot for seven days every year not just because the Hebrews lived in sukkot in the wilderness, but because they lived and ate and slept in ultimate security in fragile structures with no locks or barred doors in a country peopled by hostile nations.

God said to live in sukkot for seven days every year so that we would never forget the central message of the Bible:

* All of the feasts look both backward and forward. They memorialize things that happened in the past and prophecy things that will happen in the future, especially where events center on the Messiah. That aspect of the feasts will have to wait for another post!