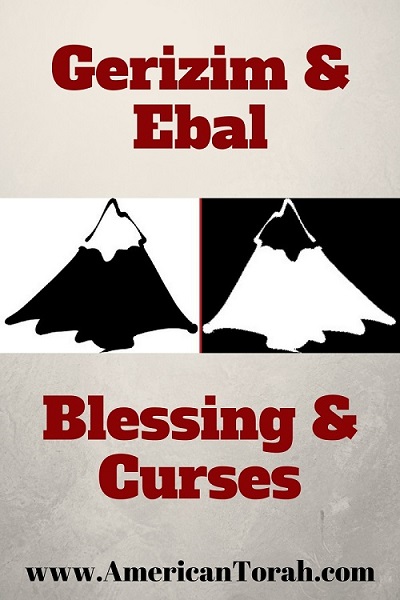 The Hebrews spent forty years in the wilderness getting to know God and their place in relationship to him. Sometimes they did things his way and things went well. Sometimes they tried it their own way and it went poorly, but eventually they made it through, which means that, on the whole, they must have done more right than wrong along the way.

They fought the Amalekites. They fought Kings Og & Sihon. They won great victories and vanquished wicked peoples who were much stronger than they, at least from the world’s perspective. Finally arriving at the Jordan River, they paused to take stock. It was the moment they had been waiting for the day they walked out of Egypt. Everything had been building to this moment.

After summarizing their long trek, Moses pointed to the two mountains, Gerizim and Ebal, and said to them “These two mountains represent the two paths you can take once you’ve crossed over. Things are going to go well for you over there if you obey God’s commandments, or they’re going to go very poorly if you don’t. The choice is yours.”

I can almost hear what they were thinking.

“Hold on. Wait just a cotton-pickin’ minute. I thought all the hard stuff was on this side of the Jordan. Isn’t it supposed to be easier on the other side?”

Anyone who has lived very long should understand that’s not how life works. There are easy moments and hard ones, but there is no “easy” stage of life. There is no point at which we can say, “I’ve arrived. I can stop trying now.” But don’t we always seem to slip back into that same assumption that it’s going to get easier once we get past this next challenge? Okay, maybe the next one. The one after that?

For you are to cross over the Jordan to go in to take possession of the land that the LORD your God is giving you. And when you possess it and live in it, you shall be careful to do all the statutes and the rules that I am setting before you today. (Deuteronomy 11:31-32)

The Jordan didn’t mark the boundary between difficult and easy. It was more like the boundary between practice and execution, between rehearsal and performance. The Promised Land was where the real fighting was to take place and the biggest fight that the Hebrews would face wouldn’t be against the Canaanites. It would be against themselves and their own inclination to forget God’s commandments.

Once their enemies were mostly defeated, Israel lost their focus and drifted into complacency and idolatry. They took possession of the land, but they forgot the most important part of living in it: keeping God’s Law. To obey is to choose Mount Gerizim and life as God intends it to be, while to ignore God’s Law is ultimately to choose Mount Ebal and death.

We cross Jordan Rivers all the time in our lives. The cycle of leaving Egypt, wandering in the Wilderness, fighting giants, and crossing into the Promised Land happens over and over for everyone. When you graduate from school, get married, have children, get that promotion…these are all Jordan Crossings. At every stage of life we face the same challenges: a struggle to achieve freedom, a period of wandering and discovery, hard battles, breakthroughs and victories, and then slowly we drift back into the chains of drudgery, of spent energy and forgotten dreams.

It’s going to happen. You will forget your purpose. You will get stuck in a rut. You will backslide. Don’t beat yourself up about it too much. Thank God that he is a long suffering and forgiving God and that he sent Yeshua to take away the curse of eternal death that disobedience merits!

Having crossed the Jordan, don’t give up. Take possession of the Promised Land that God has given you, whatever it is in your life right now. Maybe it’s a great career, a ministry, or a profound new friendship. But whatever it is, don’t stop at taking possession. Don’t ever think that possession is the end goal.

And when the LORD your God brings you into the land that you are entering to take possession of it, you shall set the blessing on Mount Gerizim and the curse on Mount Ebal. Are they not beyond the Jordan…? (Deuteronomy 11:29-30a)

Crossing the Jordan is just the beginning. The greatest opportunities for blessing and curses aren’t behind, but still ahead of you. Keep moving, and be careful to follow God’s instructions as you do. Choose to live in your Promised Land. Make it bloom and produce one hundred fold, because God isn’t giving it to you solely for your enjoyment. He is giving it to you so that you can do something with it to glorify him, to lift up his son, Yeshua, and to edify his Kingdom.

Over there, across the Jordan, putting your Promised Land to work is where God intends for you to be. It’s the place where you will be the most effective for the Kingdom. But only if you are faithful and keep your eyes on him.

One Reply to “Two Mountains over the Jordan”