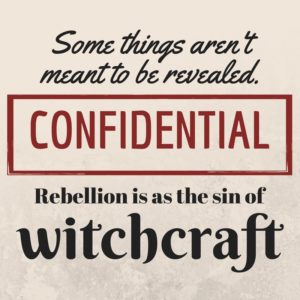 Samuel told Saul that “Rebellion is as the sin of witchcraft.” (2 Samuel 15:23) Other than the obvious rebellion of doing something forbidden, the connection used to escape me. How is rebellion like witchcraft?

The Hebrew word translated “witch” is kashaf. Maybe the past couple of weeks spent pondering biblical references to headcoverings has got me in a rut, but when I read Adam Clarke’s comments on this verse, something clicked.

It is very likely that the Hebrew…cashaph, and the Arabic cashafa, had originally the same meaning, to uncover, to remove a veil, to manifest, reveal, make bare or naked…The mecashshephah or witch, therefore, was probably a person who professed to reveal hidden mysteries, by commerce with God, or the invisible world.

If Clarke was correct, then the connection would seem to be in the uncovering of things that should remain hidden. Necromancy, fortune telling, and spiritism are all areas of knowledge that God said not to delve. There are times when a head–and a truth–should be covered or uncovered. Like uncovering a head as if to disdain the authority represented by the covering (my fellow veterans will understand this idea very well), witchcraft removes the cover of Torah, which God put in place to protect his people. It is a rejection of his providence and authority. Hence, rebellion is as the sin of witchcraft.