The relationship between God and Israel is often portrayed as a marriage by the prophets.

If you will indeed obey my voice and keep my covenant, you shall be my treasured possession among all peoples. Exodus 19:5

For your Maker is your husband, the LORD of hosts is his name. Isaiah 54:5a

Go and proclaim in the hearing of Jerusalem, Thus says the LORD, “I remember the devotion of your youth, your love as a bride, how you followed me in the wilderness, in a land not sown. Jeremiah 2:2

The covenant at Sinai is universally recognized by theologians as a marriage contract. If a marriage is a serious, lifelong commitment–and we know that it is–how much more serious must a marriage be between a God and a nation?

I had thought that the covenant at Sinai was the first real indication that the relationship was to be a marriage. But while studying this last week’s Torah reading (Exodus 18-20), I noticed some remarkable patterns just prior to the covenant, and I had to share it with you. The Scriptures are full of hidden gems like these–the Torah more than most other portions–and finding them are among my favorite aspects of study. Sometimes you have to work to find them, and you need to be careful not to read anything into them that is counter or foreign to God’s intent. But despite the effort, they’re worth it!

This post will be a little different than what I usually do at AmericanTorah. It’s a little…um…geeky? I don’t have any particular exhortation and no direct life application this time, just some really cool stuff about how the Bible is put together “under the hood”, so to speak. Bear with me. I think you’ll like this.

If you haven’t read it recently, I suggest you read Exodus 18 now and then come back. I’ll still be here…

Now, while it’s fresh in your mind, did you notice a lot of repetition in the text?

Whenever God repeats something, you can count on it being important, so let’s take a closer look.

The first thing I noticed is that Jethro tells Moses three times that he has come to bring Zipporah and her sons to Moses in the Wilderness.

Then he and Moses take turns–again three times–saying that God brought Israel out of Egypt.

Verses 1-11 comprise a chiasm in which Jethro bringing Zipporah out to meet Moses is juxtaposed with Moses bringing Israel out to meet God with the meeting of Jethro and Moses in the center. Chiasms and parallelisms often act like margin notes embedded in the text in order to highlight thematic connections or to hint at deeper meanings for those who care to dig.

One thing that this chiasm seems to be telling us is that Jethro and Zipporah are–at least in some ways–like Moses and Israel. Another pattern that seems to point to the same idea is in the Hebrew word translated as “father-in-law”. The word is khatan and doesn’t mean exactly father-in-law. It would probably be more accurate to translate it as just “in-law”, as it can refer to anyone related only by marriage. In this passage, Jethro is introduced as Moses’ in-law in verse 1, so why does it keep repeating? In fact, Jethro is called “Moses’ in-law” twelve times! (See verses 1, 2, 5, 6, 7, 8, 12, 14, 15, 17, 24, and 27.)

Twelve. As in twelve tribes of Israel.

Jethro only brought one small family–a mother and two sons–out to meet Moses at Sinai, while Moses brought twelve entire tribes out to meet God. To symbolically balance this discrepancy, Jethro’s relationship to Zipporah is pointed out once for each of the tribes of Israel.

But if the relationship to Zipporah is the focus, why use the word for “in-law” to make this point when “father” would have been simpler. Because Moses isn’t the father of the Hebrews. He is, however, a relative. In the marriage at Sinai, Moses acts as the closest male relative of the bride, Israel, presenting her to God. He is God’s khatan, His “in-law”, and he is related to each of the twelve tribes of Israel in the same way.

So yet another repetition is used to highlight the parallels between Jethro and Zipporah on one side and Moses and Israel on the other. All of this was done to build a prophetic picture. Remember that God doesn’t do anything significant without revealing it to his prophets first, and Moses was among the greatest of prophets.

If you look back at verse 8 where the two protagonists meet at the center of the chiasm, you’ll see something else odd. Jethro and Moses greet each other, talk, and disappear into the tent. Moses hadn’t seen Zipporah or his children in over a year, but he doesn’t appear to have taken any notice of them. He and Jethro carry on as if they aren’t even there. In all likelihood, Moses did greet his wife and sons, but it just wasn’t recorded in this passage. Why not? Because something very similar was about to happen on Mount Sinai.

When Israel gathered around the foot of the mountain, God told them to spend three days preparing themselves first. (Hmm. There was a paired repetition of three statements in the chiasm.) At the end of that period, God spoke the Ten Commandments to Israel with thunder and lightning, but it was too much for them! They were afraid they would die, so they asked Moses to speak to God for them. (Exodus 20:19) So Moses ascended the mountain to speak to God alone within the cloud, just as Jethro met with Moses alone in the tent.

That God arranged this prophetic meeting between Jethro and Moses shows that he knew all along what Israel was going to do. He knew that their hearts were still too hard to accept his Law and that he would have to work through Moses, but that didn’t stop him from making a permanent covenant with them. And just like Israel, he knew from the very foundation of the world that our flesh would rebel against his rule, that our hearts would be hard and our minds corrupt, yet he still committed–even in the Garden–to sending his own Son to shed his blood to seal a covenant of life with us.

Clearly when I said I didn’t have any specific exhortation to make, I was wrong. I don’t always know where these things are going when I first sit down to write.

This fact comes back to me over and over in all my studies: God knows us and yet he still wants us. God knows how you will fall even before you take your first step, but he loves you anyway. What a crushing, humbling truth to comprehend! I know me too, and all I can say is “Why, God? Why would you want me?” But who cares? The “why” is not our concern! Our job is to fall on our faces, humbly accept the forgiveness and mercy that he offers, and then to obey.

All the people answered together and said, “All that the LORD has spoken we will do.” Exodus 19:8 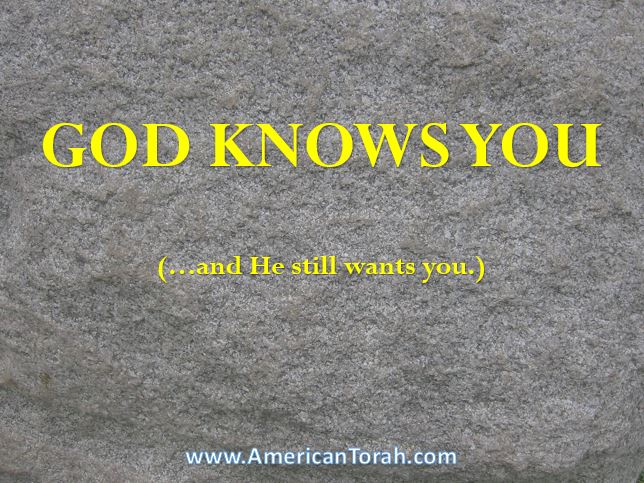