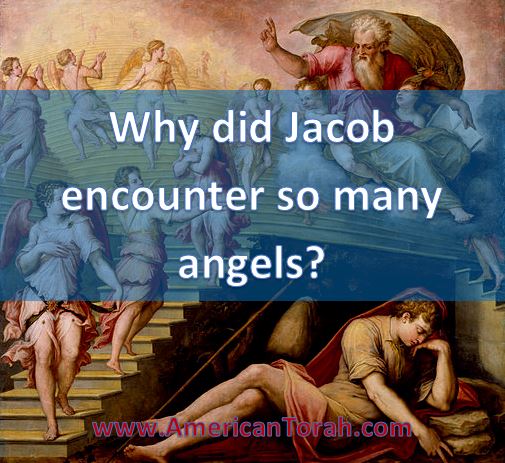 There are angels all over in Scripture. They guard people and places. They deliver messages. They execute judgment. They guide some travelers and hinder others.

But I think, of all the angelic encounters in the Bible, Jacob’s are perhaps the most mysterious.

When Jacob fled from his brother Esau after taking his blessing from their father, he camped at  Bethel and dreamed of angels coming and going from Heaven (Genesis 28:10-15). As he watched these angels busy on unknown errands, God said to him, “Your offspring will be like the dust of the earth… Behold, I am with you and will keep you wherever you go, and will bring you back to this land. For I will not leave you until I have done what I have promised you.” (Genesis 28:14-15) Since Jacob was running for his life to a place he had never visited before across potentially dangerous territory, especially for a man alone, this must have been very encouraging. He traveled from that place to Haran where he served Laban for fourteen years, was cheated out of wages but still came out ahead, fathered at least 11 children, and became very wealthy.

Many years later, traveling back to the Promised Land from Haran, Jacob again encountered a large number of angels, this time at a place he called Mahanaim (Genesis 32:1-2). He saw them and exclaimed, “This is God’s army!” Jacob didn’t interact with them or with God, at least not right away, but he was reminded that the last time he saw angels, he had been running from Esau. This time he was headed back to Canaan where Esau was still waiting. Although many years had past, we all know that some grudges remain hot long after the original cause.

Hoping to cool Esau’s anger, Jacob sent his own angels (Hebrew melek in verse 3, the same word used for angels in verse 1) ahead with liberal gifts. When he heard that Esau was coming to meet him, he reminded God of His promise so long ago and pointed out that his offspring weren’t yet like the dust of the earth, so shouldn’t God still be watching over him?

What Jacob might not have realized was that there wasn’t anything particularly special about Mahanaim except that it’s the place where God momentarily opened his eyes. Those angels weren’t permanently camped there. They had surrounded Jacob at Beer-Sheba and stayed with him all through the years. They were always there, even when he couldn’t see them. God had great plans for Jacob and He wasn’t about to let anything interfere with those plans. Even though Jacob couldn’t see them except once every few decades, they never left his side. They couldn’t abandon him to Esau anymore than God can break a promise.

Here’s the best news of all: God has a plan for everyone, and He sends His angels to make sure those plans are carried out. Now, I can’t promise you that you’ll like whatever God has in store for you. Jacob suffered quite a bit over the years. Having a destiny doesn’t mean having a life of ease. It might even mean suffering and dying a terrible, painful death. I know that doesn’t sound encouraging, but it should. If your trust is in God, then whatever you suffer in His service now will be reversed ten fold later, whether in this life or in the life to come.

On the other hand, if your trust is in something else, this ought to be the furthest thing from a comfort. Remember the angel that blocked Balaam’s path. He had set out to curse Israel. God not only turned his curses into blessing, but ensured that Balaam eventually met a violent and shameful end, and there was no counterbalancing reward waiting for him on the other side of death, but rather the lake of fire.

God’s promises are sure, His plans unchangeable. Don’t be on the wrong side of them.

There are angels all around us all the time, carrying messages, executing judgment, standing guard. Just because you can’t see them, doesn’t mean they aren’t there. Trust in God and believe in His Providence, for there is an angelic army on your side.

Truly, if God is for us, who can possibly be against us?

7 Replies to “Why Was Jacob Always Seeing Angels?”