The Scriptures call Noah, Abraham, and David righteous men, but Paul said that “all our righteousness is as filthy rags.” The Biblical narratives of these men illustrates Paul’s point very well:

The second thing Noah did when he got off the boat was to plant a vineyard so he could get drunk. (You have to give him props for patience and long-term planning.) When push came to shove, Abraham lied and gave up his wife in order to save his own skin. And who can forget the story of David and Bathsheba? Over the preceding decades, he killed hundreds of men with his own hands and then topped it off by stealing a friend’s wife and having the friend killed to cover up his adultery.

After all that, how can Scripture call them righteous men, “a friend of God”, and “a man after God’s own heart”?

Psalm 32, written by David, is a chiastic song (see here for an explanation of chiasms) that helps us understand this seeming contradiction. 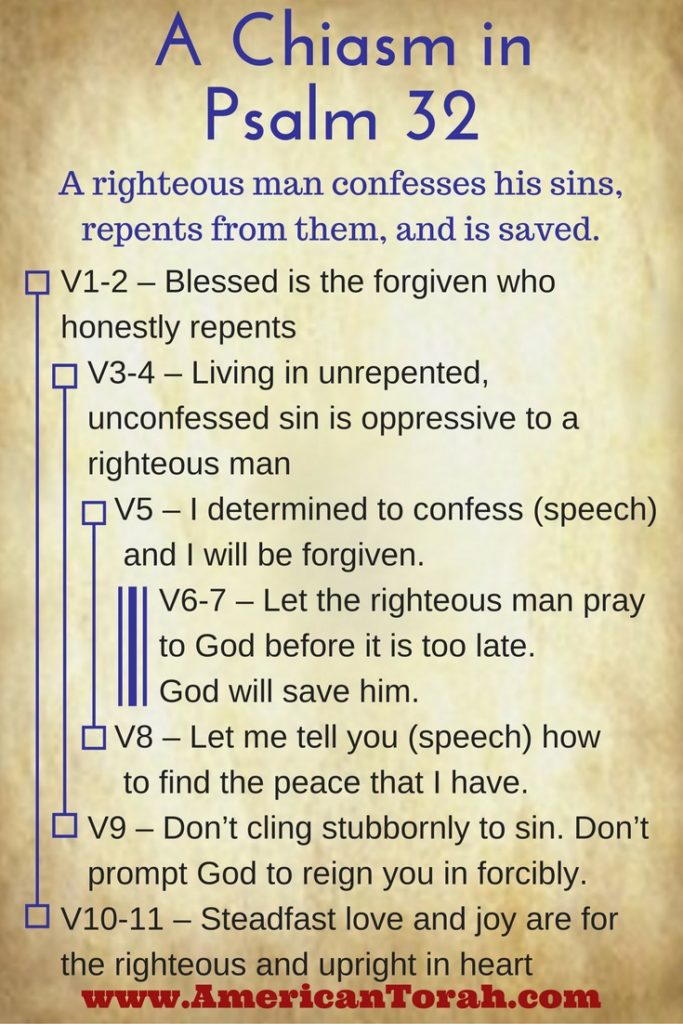 David began by describing the reaction of a righteous man to sin in his own life. “When I kept silent, my bones wasted away through my groaning all day long. Day and night your hand was heavy upon me. My strength was dried up as by the heat of summer.” He vividly described a tormented, guilty conscience. He continued by describing the antidote to his shame: confession, forgiveness, repentance. He said the same will work for every righteous person: “Let everyone who is godly pray to you while you may still be found.”

Adopting the perspective of God speaking to the penitent David, he wrote, “I will teach you how to walk and will watch over you as you go.” The wicked, to the contrary, do not repent, but cling stubbornly to their sin. If they feel shame’s call to repent, they suppress it until they can no longer hear it. Longing to be free, they reject God’s Law of life and love, and replace it with another, harsher law of death and hatred. “Many are the sorrows of the wicked,” David said, “but steadfast love surrounds the one who trusts in Adonai.”

David was a righteous man, yet he sinned. The difference between a righteous and a wicked man, according to David’s testimony, isn’t sin itself, but the man’s response to it. The righteous man doesn’t want to sin. He wants to be perfect, to be obedient to God’s instructions. He listens to his conscience and to God’s words. The wicked man hears the same words, feels the same shame, but trains himself to ignore it, to submit instead to a yoke of sin that can only lead to death.

Be the righteous man by confessing your sins to God, asking His forgiveness, and by endeavoring not to repeat them. In Romans 1-2, Paul describes what will happen if you ignore God’s call for too long.

And since they did not see fit to acknowledge God, God gave them up to a debased mind to do what ought not to be done.
(Romans 1:28 ESV)

Eventually, it will be too late. You won’t be able to turn back, either because God won’t let you or because you have just run out of time.