Someone once wrote, “It is absolutely bizarre that some Christians are still under the impression that they have an obligation to abide by Jewish Law.”

If that surprises you, then you might be operating under the same lexical error as the original writer. The problem is a confusion of terms. Most Christians will read this phrase and actually understand it to mean “It is absolutely bizarre that some Christians are still under the impression that they cannot be saved unless they obey the Law given to Israel at Sinai,” and that’s probably what the writer meant too, but it’s not what the words, as written, mean at all.

Take the word “obligation” for instance.

If I am obligated to abide by posted speed limits everywhere in the United States, does that mean I will lose my citizenship if I exceed the limit at any time or even if I ignore them altogether? Of course, not. That’s absurd. It only means that I’ve broken the law and thereby placed myself under the jurisdiction of the local justice system, often colloquially known as “The Law”.

Anyone who claims to be grafted into the tree of Israel is obligated to keep Torah because God commanded Israel to keep it forever. Yeshua (Jesus) said further that anyone who refuses to keep it and teaches others to do likewise will be called least in the Kingdom of Heaven. Notice that the offender is still “in the Kingdom,” but has been demoted by his disregard of God’s commands.

Be careful also of the term “Jewish Law.” It’s confusing because it’s often used to describe contradictory ideas. For example, many people are under the mistaken impression that Torah requires ritual handwashing before eating bread. Matthew 15 describes an incident in which a group of Jewish religious teachers asked Yeshua why his disciples didn’t wash their hands before eating as required by the “tradition of the elders.” Yeshua responded with a question of his own: “Why do you break the commandment of God for the sake of your tradition?” There is no commandment in Torah to wash one’s hands before eating. This was a “tradition of the elders” only. It was Jewish Law, but not God’s Law, and God isn’t concerned with Jewish Law.

This was the same battle that Paul fought all through his ministry. He was constantly correcting people who were conflating Jewish Law with God’s Law. People who say believers in Yeshua shouldn’t keep “Jewish Law” are making the exact same mistake the Pharisees did: they replace God’s commands with man’s. Either they reject God’s Law and keep a new “Christian” set of laws against drinking, swearing, and smoking, or they reject God’s Law because they don’t want to make the mistake of keeping “Jewish” law, not understanding that they are not the same. 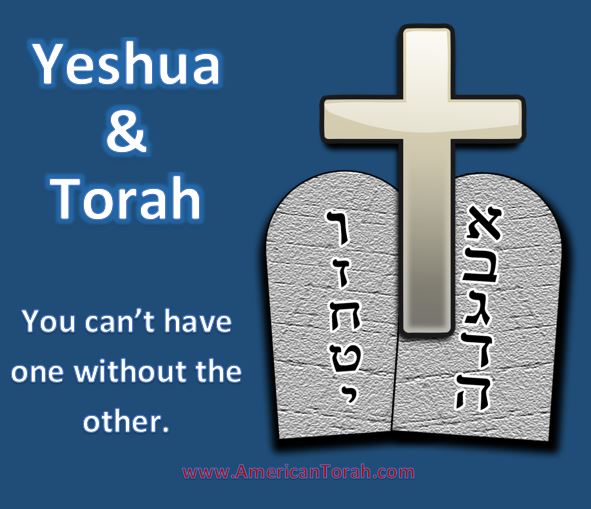 Is God’s Law Jewish? Only if you use the term “Jewish” to refer to all things related to Hebrews and Israel. It’s not technically accurate, since the term originally only applied to the Kingdom of Judah and not to the Kingdom of Israel and the tribes that were scattered by the Assyrians, but human language is rarely technically accurate. Referring to all Israelites as Jewish has a long history–even Paul did it at times–so I won’t quibble with that too much. Just be aware of the difference and be aware that the writings of the Jewish sages, the Talmuds, and the Jewish traditions are NOT the same as the written Torah. They are commentary, and often they are even very good commentary, but they cannot change, add to, or remove anything from God’s Law.

If you are grafted into Israel as Paul described in Romans, then the Law that God commanded the Israelites to keep applies to you. If you are not, then nothing that Yeshua said applies to you either, since he said that he came only for the lost sheep of the house of Israel.

2 Replies to “Whose Law Is It and Why Should You Care?”