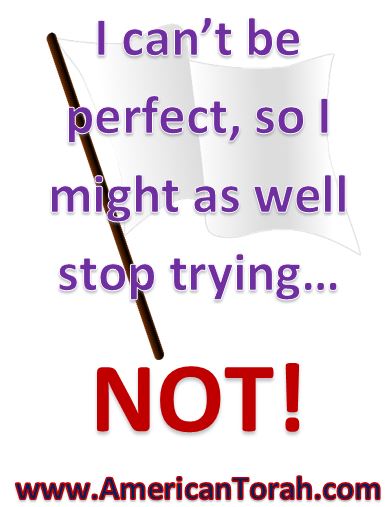 Someone once tried to tell me…

For whoever keeps the whole law but fails in one point has become accountable for all of it. (James 2:10)

Good luck trying to become righteous before God through the law…I wish you the best.

This person was equating “righteous” with “saved”, which isn’t entirely wrong. It’s just irrelevant. Whether or not a Christian is obligated to keep God’s Law has nothing at all to do with whether or not it makes a person sufficiently righteous to merit salvation. Abstaining from murder doesn’t make one righteous in this sense either, but no one believes Christians are therefore free to commit murder.

This person is essentially saying, “You can’t keep the Law perfectly, so don’t even try,” which is precisely the opposite of what James was trying to say. Just three verses earlier, he quoted Torah (the Law) from Leviticus 19:18, “If you really fulfill the royal law according to the Scriptures, ‘You shall love your neighbor as yourself,’ you are doing well.” Does it really make sense to interpret James as saying “If you’re trying to keep the Law, you’re doing a good thing, but since you can’t keep all of it, don’t try to keep any of it”? How absurd!

No, James was saying, “It’s great if you love your neighbor, but don’t forget about all the rest of it.”

Nobody’s perfect. We’re all going to fall short of God’s standards (aka Torah). That’s why Yeshua’s sacrifice was necessary. But don’t take inevitable failure as permission to fail. It’s not.