The book of Leviticus recounts a number of events and instructions that don’t make a lot of sense to us more “enlightened” folk today: sacrifices, blood, fire, ashes, etc. There is a huge cultural gap between that nation of freed slaves wandering in the desert and us modern Americans living in a land of plenty where slavery has been outlawed for 150 years. They probably had an instinctive understanding of the significance of blood smeared on the bronze horns of an altar, while we recoil in horror. The problem is not with Scripture nor with God’s instructions to Israel, of course, but with our deficient understanding and warped perspective.

Here is something a little nearer to us, though, something to which we ought to be able to relate:

Moses called the millions of Israelites together to witness the inauguration of Tabernacle and the Aaronic Priesthood. Only a small fraction of them could have had a good view of the slaughter and subsequent sprinkling, dabbing, and smearing of blood. Many probably craned their necks and strained vainly to hear the proceedings, but on that day they all experienced something that we can share.

Do you see it? The moment that unites Israel with every long-lived nation on Earth?

At pivotal moments like this one, they stood together. They survived the plagues and the sea crossing, and now remember it at Passover every year. Together, they witnessed God’s presence thundering from the summit of Sinai, and still remember it every year at Shavuot. Every nation has a number of such defining moments, the fires that burn political and religious bridges to an ancestral land and people.

The things that separate one nation from another are the very things that make a nation strong. Formative events and the subsequent remembrances are vital to the health of any nation. They identify us to the world and to ourselves. They draw us together and keep drawing us so long as we remember them together. Although such traditions can’t save us anymore than they saved the Israelites from being scattered by Rome, no nation can stand for long without the traditions and rituals that serve as a collective memory. 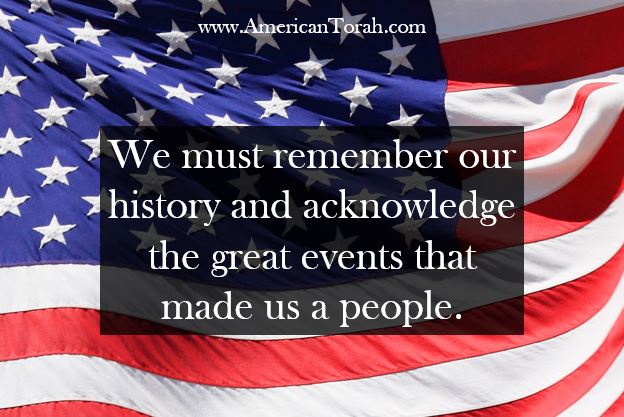 America is no exception.

If we are to survive as a distinct people, we must acknowledge our identity as a Christian nation, founded on Biblical principals. We must remember our history and acknowledge the great events that made us a people. We must teach these things to our children and ensure that they understand the value of national identity and cohesiveness.

Finally, we must not allow those who do not value America to tell us who and what America ought to be. While our primary citizenship is in heaven and not on earth at all, those of us who keep America’s founding principals in our hearts and minds are America, and those who do not keep them, neither want nor deserve the title.